Mizen Head Tour is three experiences in one exciting package. The site ranges over a dynamic Mizen Head

Visitor Centre - Above, Mizen Head Signal Station - Below, and numerous enchantments  -On The Way along the path and over the iconic Bridge.

Fastnet Hall
Ticket Office You buy your ticket here to proceed through  Fastnet Hall, Mizen Hall, the Ship's Bridge Room, upstairs to more exhibits (useful if you cannot cross the Bridge) and down to the Signal Station.

· Fastnet Rock – 10th scale model of the famous lighthouse surrounded by a 35' panoramic mural of the Mizen landscape as seen from the ocean. The model was made by Geoff McCarthy (a former Keeper and now the Attendant for the Irish Lights at the Mizen as well as proprietor of Fastnet Framing, Schull) and Dave Otway - a brilliant carpenter working in Schull.

· Water and Rock – the spectacular mosaic water feature in the Entrance Hall. Sheena Woods and Kurt Lyndorff made the mosaic pieces chipped from tiles. A labour of love.

· Hands – the Lighthouse Keepers’ hobbies. These models were commissioned by Sheena Woods, The Ewe, Glengarriff. They represent a few of the hobbies that Light keepers used to pass the long hours - Ship model making, baking, gardening, fishing and painting.

· Birds, Butterflies, Ancient ruins, Mammals, Flowers on the Mizen - collages by Richard Mills, Photographer with the Irish Examiner, who spent much of his childhood in Crookhaven.

· Lighthouses of the South West Coast by John Eagle. Wonderful photographic prints. John has made postcards of all the Lighthouses round the Irish Coast, seen displayed here. Recently, John has taken up oil painting with great success. You can buy prints and paintings from John directly. To contact him: www.johneagleart.com

· Local Keepers and the Irish Lights - A film by Tish Barry and Ted Dolan. It is a touchscreen tour of the Fastnet Rock Lighthouse

· Sky to Seabed - Sheena Woods crafted 500 tiles individually from local materials such as sand, crushed rock, and crushed mussel shells to make a stunning sculpture from the ceiling to the floor.

· Fastnet Rock Lighthouse Centennial Scroll and photos of the reunions of Irish Lights personnel and former light keepers.
There is a photo collage to celebrate the lives and Golden Wedding of Tom and Mae Barry and Mae's 80th birthday - in 2003. Tom RIP died at the age of 107 in July 2003. His wife Mae still lives in the family farm on the other side of the Mizen with her son and his wife and their children.
Mizen Hall
Mizen Hall opened in summer 2008.
The room is dedicated to Phil and Sherry O'Donovan with gratitude for their generous donation.

An Historical Journey round Goleen Parish from Lowertown to Dunbeacon

In this room we have:

· Navigational Aids Simulator - A CGI journey from Crookhaven round the Mizen and out to the Fastnet Rock Lighthouse on a training simulator with real time ECDIS, Radar, weather conditions, other shipping conditions.

Washroom facilities for your comfort are located to the right off the Entrance Hall.

The Gift Shop
The Gift Shop is very popular with visitors. There is a great variety of Gifts, Souvenirs, Books, Model Ships, Cards and Postcards. Our speciality is Toys for all ages with prices to suit all pockets.

The Playground
A small playground for younger children is at the entrance. There are picnic tables nearby.
On The Way
· The main path leads from the Visitor Centre above to the Signal Station below - a ten minute walk.

· The Paths– there are four new paths along the way.
o Sea Arch– a steep path down towards the ocean ends in an observation platform with views of the Sea Arch and back to the Bridge and Signal Station.
o Bridge View– a level path to an observation platform where you can look down at the Bridge and up north to the Beara Peninsula. This path is good for those unable to take steep climbs
o Dunlough View– over the Bridge and up by the Explosives Hut where the cordite for the explosive Fog Signal used to be kept there is a path that takes you to a breath taking observation platform. The views are sublime in every direction.
o Derrick Path – a short path leading down to the Derrick stand that was once used to supply the Station from boats before the Bridge was built in 1909. The views under the Bridge are fascinating.

On the way there is plenty to see.
· Propeller of the SS Irada taken from the sea off Mizen by a team of local divers. The last blade was attached in March 2003.
· Lightbuoy from Foreland, Belfast Lough
· Fastnet Centennial Memorial. A scale replica of a course of stones in the Fastnet Lighthouse installed by the Commissioners of Irish Lights to commemorate the Centenary of the Building of the Fastnet Rock Lighthouse 1904.
· Sea Life Look out for dolphins, whales and basking sharks. Mizen Head is a renowned spot of sea watching. Minke, Fin, Pilot, Humpback, Killer Whales, Dolphins pass by, especially during the winter month. In summer months the Basking Shark and the occasional sun fish can also be seen.
· Seals under the Bridge
· Sea Caves sheltering the remains of L’impatiente, a French frigate from Wolfe Tone's fleet sunk in 1798.
· Choughs, kittiwakes and gannets are our resident seabirds.
· The famous 99 steps – a test of your fitness.
· The Arched Bridge – It looks as exciting as it is to cross, but don’t be afraid, it is well fenced and solid.
· Ancient Rocks – the tortuous folding of Old Red Sandstone.
· Views up the west and south coasts.
· Radio Transmission Hut. The first radio beacon in Ireland (the second in the world) was across the gorge.
· The Explosives Hut where the cordite that created the explosive fog signal was stored.
· The Old Fog Signal House at the end of the point.
· The Lights at the end of the world – USA next stop!

The Former Irish Lights Buildings Below:

The Keepers' Kitchen and Bedroom
These have been retained to recall the lifestyle of the men of the Irish Lights.
Mizen Environment
The corridor has been turned into a cave with visions of the ecology and heritage of the Mizen Peninsula.
The Building of the Fastnet Lighthouse
The first room displays the fascinating story of the building of the Fastnet Rock Lighthouse.
Sea life and Underwater Wrecks
The second room evokes life underwater. There are over 80 major wrecks round the Mizen and hundreds of smaller boats. There is an underwater film here too.
The Fastnet Race
The third room shows the Fastnet Light as seen at night from the deck of an Ocean Racer. The world famous race from Cowes to Plymouth round the Fastnet takes place biennially.
The Engine Room
In the corner of the engine room is a standby generator which was used in emergency when electricity failed. The Land is the Danger' Norris Davidson's 1970s film of the Irish Lighthouse Service is shown in here.

The Marconi Radio Room
This room has follows the story of radio communications at Mizen Head Signal Station. Marconi was in nearby Crookhaven during his search for a suitable site to send the first transatlantic message. He had masts at Brow Head and put a telegraphic transmitter on the Fastnet Rock Lighthouse. A recent storm took all the sand out of Galley Cove and exposed the huge cables that connected the Fastnet with his radio room in Crookhaven. In 1931 Mizen Head Signal Station had the first radio Beacon in Ireland - it spanned the whole gorge at the Bridge. This room is dedicated to this fabulous story.
Workmen's Quarters
The renovation of this house was completed in 2008.
The Displays include:
· Wrecks Lists of wrecks off the south west coast of Ireland.
· Maps A unique collection of facsimile maps and coastal pilots held in the security stores of the National Maritime Museum in Greenwich. Since the time of Ptolemy this area has been named on maps and charts.
· Irish Lights Archives show the everyday life on a station.
· The Irish Lights Boats
· Birds of Ireland A spectacular mural by Jules Thomas showing the birds of the Mizen peninsula, their habitats, nests and eggs.
Watch a Walk down the Mizen Paths on Youtube

Group & Family Deals available
Family (2 Adults and up to 4 Children): €25 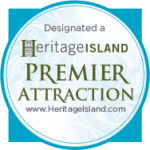